Dividing up marital property can be a stressful and difficult part of any divorce. But when the marriage involves significant or complex assets, the division of property can 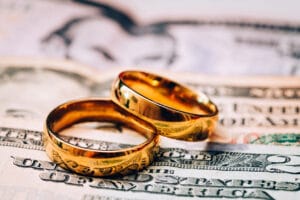 Unfortunately, unlike some issues in a divorce, the distribution of property becomes final when the divorce does. Except in extremely limited situations, it is not possible to modify a distribution of marital property. In other words, it is important to get it right the first time. Here are several mistakes couples in a high asset divorce often make.

Trusting Your Spouse Too Much

In a high-net-worth marriage, at least one spouse is usually financially savvy. Often, that spouse takes over management of the wealth, sometimes to the other spouse’s great relief. But when it comes time to divorce, the spouse left out of financial matters during the marriage may lack information about what the marital assets are, and the other spouse could take advantage of that.

Your spouse may be telling the truth about what the assets and liabilities of the marriage are, but you can’t take that to the bank. Talk to your attorney about whether it is worth hiring a financial professional to investigate unknown assets, sources of income, or secret expenditures by your spouse.

Some spouses reason that if property isn’t in their name or can’t be found, it will not or cannot be divided in a divorce. But hiding assets or transferring them to a third party will almost always probably backfire on you. If your deception is discovered before the divorce is final, you will lose your credibility with the court, as well as the asset. If it is discovered afterward, your spouse may be able to have the decree set aside for fraud and receive three times the value of the concealed asset as a punishment. Concealing assets is wrong and not worth the risk; just don’t do it.

Failing to Use Valuation Experts When Needed

In order to fairly divide marital assets, it is critical to understand not only what they are, but what they are worth. Getting all of that information can be tedious or difficult, especially if there are difficult-to-value assets such as a closely-held business or professional practice. It can be tempting to “guesstimate” what certain assets are worth. In the case of a business operated by a spouse, it might seem easiest to rely on what the spouse says the business is worth. Failing to get a definitive value of assets is nearly always a mistake.

Unless the value of all marital assets are easy to discern (like bank accounts or publicly traded stock), you should get a professional valuation of certain assets. Yes, the services of an expert can be expensive. But the certainty is worth it, especially in a high-net-worth marriage. For instance, it is not uncommon for one spouse’s business valuation expert to show that a business is worth hundreds of thousands of dollars more than the other spouse claimed. Don’t rely on your spouse’s expert –  get your own.

It is difficult to forget about certain assets, like a house, car, or piece of artwork. But there are some assets that can be intangible, yet highly valuable. Examples include burial plots, US Savings Bonds, rewards programs and points, cryptocurrency, the goodwill in a business, and intellectual property like patents and trademarks. Another valuable, but easily overlooked asset is stock options awarded to one spouse as compensation. A good divorce attorney will help you consider these assets when creating an inventory of marital property.

Giving Up Too Much Because You Feel Guilty

If you asked for a divorce your spouse didn’t want, had an affair, or otherwise feel responsible for the end of the marriage, you probably feel guilty. Whether or not your guilt is justified, giving your spouse everything they want when dividing property in order to ease your guilt is a terrible idea. It probably won’t work, it will leave you without assets to which you were entitled, and you won’t be able to undo it.

Demanding Too Much Because You are Angry

On the flip side of the previous mistake is trying to take your spouse to the cleaners because they hurt you. When a spouse has cheated or wronged you somehow, it is natural and understandable to want to “make them pay,” but you will harm yourself in the process. Refusing to reach a reasonable settlement because you want to rake your spouse over the coals in court is likely to make you pay as well. Your legal fees will be much higher, and you likely won’t get any more of the assets; Ohio courts divide marital assets equally unless doing so would be inequitable.

Agreeing to an Unfavorable Settlement Just to Get it Over With

The process of reaching a divorce settlement can feel like it is taking forever, especially when there are significant assets to sort through. Once you and your spouse have identified and valued all the assets in your marital estate, it is time to figure out who gets what. Even in marriages without many assets, there is often a lot of negotiating back and forth; it can be even worse in a high asset divorce, especially if your spouse is trying to wear you down.

Many spouses exhausted by divorce negotiations are tempted to cry, “Give them whatever they want; I just want it over with!” Divorce can make you feel like an animal in a trap: chewing off your leg might get you out, but at great cost. Talk to your attorney to make sure you won’t later regret a settlement you make out of desperation. Remember: the divorce process won’t last forever, but you will have to live with (or without) your property settlement will.

It’s not only an asset’s value that you should be concerned about when dividing marital property. Some assets come with tax burdens, and others with tax breaks, so that two assets with the same “value” might not confer the same financial benefit. And while most assets can be transferred tax-free between spouses in a divorce, failing to follow proper procedures (e.g. for the division of retirement plans) can trigger serious tax consequences. Proper legal guidance in property division includes proper planning for tax consequences.

Thinking You Need an Aggressive Lawyer

In a high asset divorce, you need an attorney who understands the financial implications of complex marital property division. And you certainly need an attorney who can negotiate well and advocate effectively for you. Too many people make the mistake of thinking that when there are significant assets on the line, they need a “pit bull” lawyer.

The reality is that attorneys who pride themselves on being aggressive tend to stir up conflict rather than work toward resolving it. Unnecessary conflict extends the divorce process, makes it more stressful, and increases your attorney fees. There’s a reason most wealthy people (including most recently, Bill and Melinda Gates) settle their divorce cases. They would rather negotiate to divide their assets fairly than waste them on a court battle. They would rather plan for their grandchildren’s inheritance and charitable giving than waste dollars needlessly, when reasonable alternatives exist.

If you are planning to dissolve a high-net-worth marriage, work with an attorney who understands the issues you are facing and can help you avoid costly mistakes. Contact Melissa Graham-Hurd & Associates to schedule a consultation.

Our team is fully operational and here to support you. There’s no doubt that the coronavirus (COVID-19) is still creating challenges, but we are remaining open during regular hours, and are meeting with people by appointment via Zoom or telephone, still filing with courts, attending hearings, and still working to solve your problems and concerns.
To your health and success,
Melissa Graham-Hurd & Associates, LLC